THE DARKNESS, THE LIGHT, AND THE CALIFORNIA STEM CELL PROGRAM 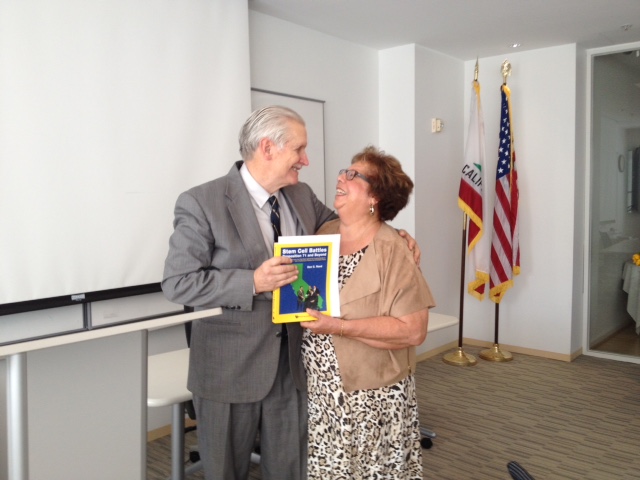 This is the worst time of our lives.

A few feet from me, Gloria, beloved wife of fifty years, is dying of cancer. We do not know how many days she has left. I just got her up and helped her to the bathroom, and though it was a very short walk, she could almost not help at all. Afterward I gave her morphine for the pain, lorazepam for the nausea, plus water, a half-teaspoon of ice chips, and a little gatorade. That’s all she will take right now. She eats nothing.

Outside, coronavirus roars. The streets are bare, movie theaters and all “non-essential” businesses are shut down. We are required (in California and most states) to stay home from work.

I was already home with Gloria. As soon as I told my boss Bob Klein that my wife had been diagnosed “inoperable” (for pancreatic cancer: she does NOT have the coronavirus.) he immediately sent me home, saying I could work from anywhere.

What he did as an act of kindness has now become mandatory across the state and nation.

So. How will we win?

Sooner or later, both the coronavirus and cancer will be defeated by medical research, like that funded by the California Institute for Regenerative Medicine (CIRM), California’s stem cell program.

But only if that research continues.

I have written three books about CIRM, including most recently, “REVOLUTIONARY THERAPIES: How the California Stem Cell Program Saved Lives, Eased Suffering—and Changed the Face of Medicine Forever”, from World Scientific, publishers of the late Stephen Hawking.

After three books, you might think I had run out of words!

But the closer you look at CIRM, the better it gets, and the more you see there is to tell. Every one of the thousands of scientists involved has a story, and I wish I had lives enough to tell them all.

Even so, which angle to take next? This is a crucial time in CIRM’s existence. It began in 2004, and the funding is almost gone.

We must not let this program die.

So I called up Bob Klein, the man who began and led CIRM from the beginning. Whenever I have a stem cell question that is particularly difficult, I ask his advice. I thought I had a perfect way to summarize the process CIRM has made.

“Should I write a series of mini-essays as “An Alphabet of Cure Research”?, I asked.

“No”, he said, without hesitation, “Focus on the colleges, the universities, all the institutions which CIRM has helped.”

That would be a lot!

As a writer, I am drawn to extremes, the short and the tall, the big and the small. Let’s take a look.

One of the SMALLEST grants I could find was $2,500, which helped fund a conference at UC Irvine, the “Orange County Summit on Regenerative Medicine”.

But just two thousand five hundred dollars—how much good could a small grant do?

Which reminds me of a story– at my age, most things do.

I was in an enormous cave, a peofessional tour deep underground, and the guide was about to turn out the lights. There were several backup light sources, she said, so don’t be afraid, but you are now going to experience– total darkness.

Then the lights went out: blackness like nothing I had ever experienced. Nothing. I stood absolutely still, not going to wander off and get lost.

We waved our fingers in front of our faces, but could not see them.It was the absolute absence of light.

And then, the guide struck a match. Just one, a fragment of wood and sulphur, but that tiny flame filled the room.

America is in that darkness now. And meetings among scientists and the public are how we will bring back the light.

Among the scientists present were:

And a bunch more top people, in that one meeting.

Was that the only assistance UC Irvine received?

Not exactly. If you go to the link below, you can see exactly what the ONE HUNDRED TWENTY-FOUR MILLION ($124,830,106.00) dollars was spent in support of, on UCI projects funded (in full or in part) by CIRM.

So. If I was to speak before a UC Irvine Alumnae group, (which I am sure exists) those public-spirited citizens who work night and day to raise funds for their beloved university, I would say:

Fight for CIRM! The California stem cell program has fought for you, gathering funds for your scientists, when sometimes it seemed there were no other funds available. And it must fight again. Why?

Look around, UCI alumnae, I would say, do you not need continued funding for your scientists? Will a whole bunch of money spring from somewhere else? Do you anticipate a multitude of major grants from the federal government? Personally, I would not hold my breath.

But CIRM (if renewed) will have major and continuing funding available, to support the best science, like UCI has done.

CIRM is fighting to raise another $5.5 BILLION, which can only be gotten through the citizen initiative process: as we did before.

So stand beside us now, as individuals, and as groups, any group you may belong to.

Have you personally endorsed the CIRM Renewal yet?

And if you want to see some of the major groups and superstar scientists who have endorsed us already, click here.