WHY AFRICAN-AMERICANS SHOULD SUPPORT THE CALIFORNIA STEM CELL PROGRAM

“Do you know about sickle cell disease?”, I once asked an African-American woman.

“Not much”, she said, “Just that my Aunt died of it– and also I work for a biomed company.”

I went ahead anyway, talking about the California stem cell program, which is to me the greatest medical accomplishment on Earth.

What is the best path to cure sickle cell anemia? I am no scientist to tell you that.

But I do know the California stem cell program is trying hard and has spent forty-one million dollars ($41,010,680.00) working to end sickle cell disease. (1)

One in every 500 African Americans has sickle cell anemia, an inherited disease, with a single gene mutated. That mutation causes the blood cells to warp at certain times, called crises, during which red blood cells change from soft and round to hard and sickle shaped.

Crises are agony: pain like broken glass in the veins. During the hours or days they may last, crises shut off oxygen flow to the organs, damaging them, which may subtract decades off a person’s life.

Sickle cell patients live an average of only 36 years.

And these are not gentle years.

“By age 20, about 15% of children with SCD suffer major strokes…. (of those who reach) 40, almost half suffer significant mental dysfunction, as well as recurring damage to lungs and kidneys, and severe chronic pain…” (2)

As if that was not bad enough, SCD patients are more susceptible to attacks of COVID-19. As patient advocate Adrienne Shapiro said:

“Sickle cell patients are at risk of dying from the virus as many have no spleens, are immune-compromised, and suffer from weakened lung function…”

How can this terrible disease be fought?

Don Kohn, the UCLA scientist who developed that therapy, is adapting it for use against sickle cell disease.

How will it be done? In my non-scientist understanding, the procedure has three steps: remove, repair, replace;

1. Remove some of the patient’s bone marrow (where the blood is made);

2. repair the gene that is causing the trouble;

3. replace the now corrected bone marrow, where it will hopefully get rid of the bad genes in bone and bloodstream.

Here are two more ways CIRM is fighting this disease. Mark Walters, of the Children’s Hospital of Oakland Research Institute, is using a similar approach, but with a microscopic scissor-like tool called Crispr CAS-9 to remove the bad gene.

Importantly, Dr. Walters not only received a grant of $4.49 million from CIRM, but his project will be eligible for additional funding — due to “the landmark agreement between CIRM and the National Heart, Lung and Blood Institute…under the NIH “Cure Sickle Cell” Initiative.”

What does that mean? California and the Federal government can now work together in the fight against sickle cell. (4)

Joseph Rosenthal, of City of Hope, is trying a third approach. The patient will first receive a “milder, less toxic chemotherapy treatment that removes some, but not all of (the) diseased…cells.” Then, a donor’s cells are transplanted. Hopefully, this will allow “the donor stem cells to engraft and create a healthy supply of non-diseased blood cells without causing an immune reaction…” (5)

In additional to sickle cell disease, people of color also suffer disproportionately from many, (if not most!), chronic diseases.

“From hypertension and heart disease, to eclampsia and cancer, African-Americans experience illness at a high rate, and have a lower life expectancy — compared to any other racial or ethnic group.” (6)

Reduced access to health care is an unfairness faced by the black community.

The 2020 stem cell initiative (Proposition 14) aims to focus on access and affordability for all Californians. There will be a committee of 17 individuals dedicated to finding or developing affordability and accessibility to therapies developed by CIRM. Also, by fighting chronic disease, curative therapies offer an opportunity to reduce healthcare disparities, and give more equal opportunities for healthier lives.

What has the program accomplished, so far, in addition to sickle-cell research?

Since it began in 2004, the California stem cell program has been involved in more than 1,000 research projects, 94 clinical trials (64 trials directly funded, 30 with funding contributed in the critical early stages); it has enrolled or will have enrolled roughly 4,000 patients in clinical trials, and produced more than 3,000 peer-reviewed and published scientific and medical discoveries.

These are not just empty numbers, blobs of ink, featureless statistics on a page — these stand for our loved ones, members of your family and mine, people for whom we need cures, right now — and CIRM is working on it.

Already, the California program has saved lives; 50 small children were diagnosed with the life-threatening “Bubble Baby” disease, (also known as SCID, Severe Combined Immunodeficiency); they are now healthy, due to research funded by California’s stem cell program. CIRM has given upper body function to newly-paralyzed patients, and restored sight to a previously blind mother, allowing her to see her children for the first time.

But return your thoughts to sickle cell, please. 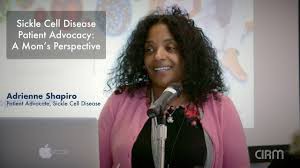 May that great dream become real, and soon — because black lives do matter.

URGENT!!! If you want the California stem cell program to continue its fight against sickle cell and other forms of chronic disease, vote YES! on Proposition 14, the California Stem Cell Research, Treatments, and Cures Initiative of 2020.

For more information, go to www.caforcures.com. And remember to vote!