THE PRICE OF ALZHEIMER’S: Why California Must Vote YES! on Prop 14

Lauren Miller Rogen, her husband Seth Rogen and brother Danny are dedicated to the battle against Alzheimer’s disease.

The following article is co-written: first by Don C. Reed and the latter half by Ms. Miller-Rogen.

On November 3rd, California will vote on Proposition 14: the California Stem Cells for Research, Treatments and Cures Initiative of 2020. This will re-authorize and fund ($5.5 billion) the California stem cell program. Is this amount necessary?

It is if we consider the price of chronic disease. The financial expense of just Alzheimer’s and other dementias is estimated at a staggering $305 billion per year (statistic courtesy Alz.org) but that does not include the very real human cost.

One of my late wife Gloria’s best friends was (let’s call her) Marian. She and her husband Bill were semi-retired, apparently safe and sound in their twilight years. Both had climbed to the top of their fields, and were financially well-off.

But then Bill began to lose his memory. Not the normal “where are my car keys” problem, but “What is a key for?” and “Who are you, anyway?” — forgetting his wife of several decades.

Marian was determined not to put Bill into assisted living, and supervised him to the point of exhaustion every day and night.

One afternoon my wife came to take them both out to dinner. While there, Marian had to use the restroom, and Gloria said “Sure, Bill will stay with me.”

For several moments all went well. Bill would make little noises which sounded almost like speech, and Gloria would nod and smile and say something — anything-just to keep the “conversation” going.

And then Bill yawned, and stood up, as though this had all been nice but he really had to go to bed now — and began to unzip his pants.

Gloria tried to talk him out of it, but he intended to undress, and that was that. When she tried to bring his pants together, he became angry and slapped her hands away, and he was a big man, and it hurt.

“I felt like the whole restaurant was watching me,” said Gloria later, “and then — “

“What are you doing with my husband?” snapped Marian.

Gloria, seldom at a loss for words, tried to explain — and Marian burst out laughing.

“He does that all the time now,” she said.

But though she made light of her day-to-day struggles, living with an Alzheimer’s husband, still the cost in suffering added up.

Bill was physically very powerful. When he became frightened, he would clutch on to Marian’s arms, so tight his grip left bruises. But still she would not consider assisted living.

One night, Bill disappeared. He just wasn’t there. Marian and their son drove frantically around town, to all the places he liked to go, but could not find him.

Miles away, Bill was standing on a bridge, over a freeway. He was a powerful walker, and gotten halfway across the bridge. But now, the blinding lights and roar of cars hurtling past was terrifying. He stood at the edge, unsure what to do.

Incredibly, a woman driving by, slowed down. She recognized the symptoms of Alzheimer’s, and pulled her car up next to Bill, there where he stood on the bridge. She opened the car door to block his escape route from one angle, and got out of the car, standing in front of him. After calling the police, she stayed there, talking softly to Bill until help arrived.

Consenting at last for Bill to be in assisted living, Marian hired someone to sit with him all night, afraid the attendants might tie him up so he would not “give trouble”

As Bill’s body gradually “forgot” how to function, the organs gradually breaking down, Marian took him home, to hospice, nurses who would ease his passing.

Sometimes when Bill was lying in bed, and she was sitting beside him, Marian would take his hand and say, “Open your beautiful blue eyes, honey, let me see how handsome you are.” Sometimes it seemed he could still hear and understand, and maybe deep down he was remembering how much they loved each other.

Bill is gone now, his suffering ended. But Marian’s health was broken by the long struggle. She is older than her years, and frail.

This must not be allowed, this price in pain.

But what to do? Yes, of course, hire scientists and doctors, so they can work together to bring cures — but who will pay for that?

When my son Roman became paralyzed in a college football accident, I tried to raise money to fight paralysis. My students helped me put on a play at school, to give the ticket proceeds and candy money to Christopher Reeve.

The play took all year to write and produce, and it raised the grand sum of — $4,000. The PTA officials sat on the stage and counted it, and wrote a check for Christopher Reeve.

Christopher Reeve sent us a great letter saying, in part, “One day, Roman and I will stand up from our wheelchairs, and walk away from them forever.”

Cure did not come in time for the paralyzed Superman, but I still believe in his great dream: that one day my son will get up from his bed of pain, and walk again.

But again, how do we get funding to pay for the required research?

Governmental funding? California paid for a paralysis bill named after my son, “The Roman Reed Spinal Cord Injury Research Act of 1999”. That was a step in the right direction, about a million and a half a year for ten years — plus about $87 million in matching funds — but not enough; couch change compared to the need.

My gut belief is that the researchers are on the edge of finding cures — if they are adequately funded. This can happen. Scientists will be strongly supported by the California stem cell program, if the voters approve its re-authorization.

Patient advocates must lead that effort. On November 3rd, every voter in the state should vote YES! on Proposition 14: continue the California stem cell program!

And now, here is renowned actor Lauren Miller Rogen, who also uses entertainment to fight chronic disease, (Alzheimer’s), but on a far more successful basis than my small plays. 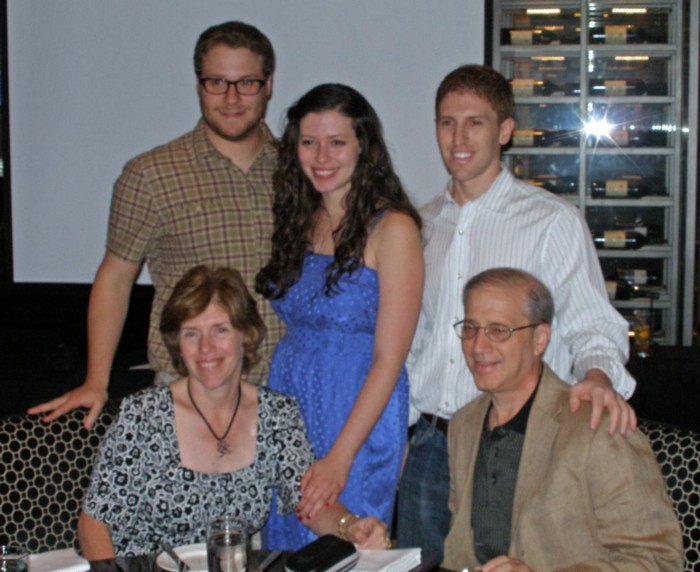 “When I was 25, my mom, Adele, was diagnosed with Alzheimer’s. She was only 55. Our family was lost. My mom had been a teacher for 35 years; she was strong, smart, independent, young — how could this be happening to her?

But her parents also had the disease, so perhaps we were in denial.

Cruel symptoms began, and became worse. She was (respectfully) asked to step down from her teaching job. She started wandering away from her house, her friends faded away, and the burden fell entirely on my dad. And what a burden it was.

My parents lived across the country, so I only saw them every few months. With each trip, my Dad showed more and more exhaustion. It became clear that if we didn’t intervene and get help for my dad, the disease would kill him first.

Fortunately, he (eventually!) accepted help and we were lucky enough to be able to afford bringing in a caregiver so that he could have a break. Unfortunately, this is not a reality shared by many. So many are unable to make a “choice” about where to care for their loved one because quality care is so expensive. It’s another cruel symptom of this disease.

In 2012, my husband (actor Seth Rogen) and I realized we had an opportunity to raise some awareness (and hopefully money) to fight this dumb disease. So, we hosted a Variety Show that year with comedians like Aziz Ansari, Kumail Nanjiani, and Patton Oswalt and musicians like Tenacious D and Bruno Mars and raised over $300,000. But that wasn’t the important part. What happened next is…

We started getting notes from young people who appreciated that we were speaking out about the disease. Young people are often over-looked when it comes to Alzheimer’s because of course it’s the older population which is most affected by the disease. But many, many young people have watched their loved ones struggle with this disease and they want to do something about it. They have stories to be told and they want to take action and change the future.

So, we decided to form an organization, HFC, which eight years later has raised over $12 million. We’ve had variety shows (you can watch our Hilarity For Charity show from spring of 2018 on Netflix) and even hosted a county fair in LA last year to raise money and bring light to this dark disease. But it’s what we’ve done with these funds that makes me the most proud.

Although of course we dream of a cure for Alzheimer’s Disease, we’ve always wanted to make sure that we were impacting the lives of people who were experiencing the disease today. So, we set out to do that in three ways: provide care, invest in research and educate people about brain health.

In 2015, we formed a partnership with Home Instead Senior care and since then have provided over 300,000 hours of free, at home care through our Alzheimer’s and Dementia Care Relief Program. We’ve established dozens of online support groups which match people in similar situations, and we’ve partnered with the Rosalyn Carter Institute to provide 1-on-1 training to caregivers.

Simultaneously, we’ve invested in cutting-edge brain health research through Dr. Richard Isaacson at the Weill Cornel Alzheimer’s Prevention Clinic. In our soon to be released study, we’ve shown that online brain health education is actually effective in making one’s brain healthier — which in turn should hopefully lead to less cases of Alzheimer’s down the road.

Taking these actions have made me feel like I have some sort of power over my mom’s disease. When we said goodbye to her this past February when she was 68 years old, I was able to feel proud that in her honor, we’ve impacted the course of this disease somehow. And we certainly don’t intend to stop anytime soon.

But remember when I said we of course dream for a cure to this disease?

As the Alzheimer’s patient advocate on the board of the California Institute of Regenerative Medicine (CIRM), I will be part of that tremendous effort.

Since CIRM began in 2004, they’ve funded 22 grants for Alzheimer’s research (totaling around $52 million). These can be found at the below URL:

But now that money is almost gone. We must insure the funding is restored.

For followers of Alzheimer’s disease research, the most exciting news is that if CIRM is reinstated in the upcoming election, $1.5 billion will be set aside for research into diseases and conditions of the brain and central nervous system.

That is exactly the type of investment that is needed to find a cure for Alzheimer’s, and why it’s so imperative CIRM continues to be funded. HFC is happy to provide care and education today, but we need CIRM’s help to find a cure for tomorrow.

On November 3rd, vote YES! on Proposition 14, the California Stem Cells for Research, Treatments and Cures Initiative of 2020.

Do it for someone you love.

Don C. Reed is the author of several books on stem cell research.