As the father of a paralyzed young man– and a supporter of stem cell research– I recommend Dr. Hiral Tipirneni (D) for U.S. Congressional Representative of the 8th District, Arizona, in a special election, to be held on the 24th of this month.

If you support stem cell research, this matters to you—even if you don’t live in that state. Let me tell you why:

Hiral Tipirneni (hear-al tip-er-nen-ee)  is running for the office  of former Representative Trent Franks  (R), who resigned after allegations of sexual harassment.

Astonishingly, the race (in a deeply conservative district) appears to be tied. (1)

There are many reasons to support candidate Tipirneni. At the bottom of the page is a URL for Dr. T’s positions, side by side with rival Debbie Lesko (R). (2)

But what is life and death important to me?

Unfortunately… Tipirneni’s opponent, Debbie Lesko, sponsored a law to make new embryonic stem cell research a Felony 6 criminal offense, with a penalty of one or more years in jail, and/or a $150,000 fine. (3)

Candidate Lesko voted to criminalize research which may one day cure not only paralysis, but also numerous other forms of chronic disability and disease.

Hiral Tipirneni., however, was an Emergency Room doctor for ten years, before becoming  a cancer researcher. Today, she is working to find cures for breast cancer (which killed my mother), leukemia, (which took the life of my sister), and prostate cancer, of which I am (so far!) a survivor.

One candidate works to save lives; the other wants to put researchers in jail.

Conservative outside groups want Lesko in office desperately, and are flooding the district with big money and ads, attempting to dominate the election. (4)

Like this one: although I live in California, this race is so important to me that  I donated $35 to the Tipirnene campaign.  http://hiralforcongress.com/

Do you support stem cell research?

Chip in a couple bucks, if you can. Go to: http://hiralforcongress.com/

And– if you have a friend in Arizona, and they live near Phoenix (District 8) give them a phone call. Make sure they vote!

On behalf of all who suffer chronic disease or disability– thank you, very much!

Don C. Reed is the author of the forthcoming book, “CALIFORNIA CURES: How the California Stem Cell Program is Fighting Your Incurable Disease!”, from World Scientific Publishing, Inc., available for pre-order from Amazon now. 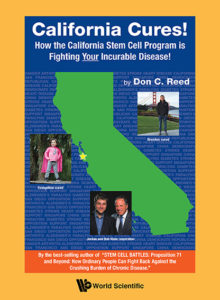