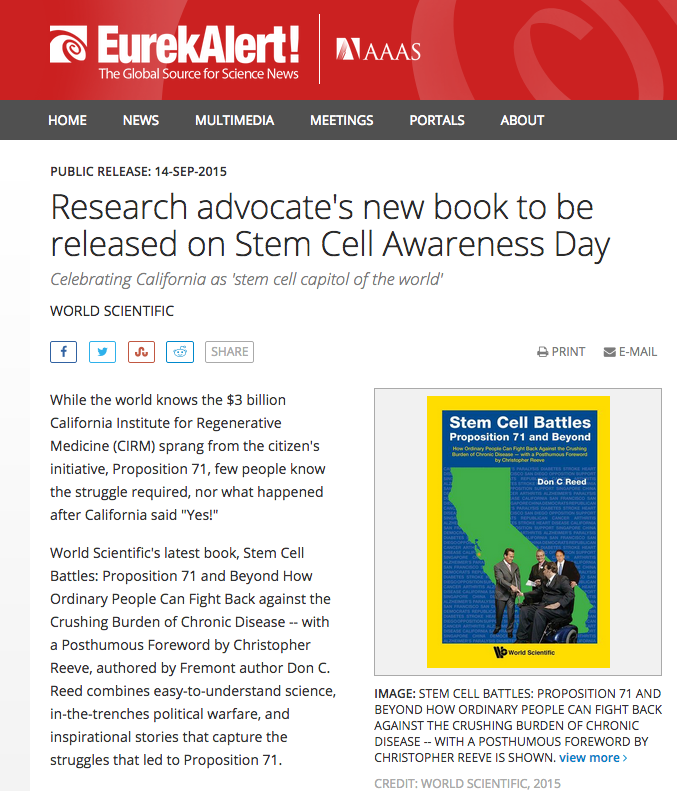 Yesterday was stem cell awareness day. In honor of this important event, Don Reed held a book reading at CIRM for his newly released book, STEM CELL BATTLES: Proposition 71 and Beyond: How Ordinary People Can Fight Back Against the Crushing Burden of Chronic Disease.

Don has worn many hats during his life. He’s been a power lifter, a diver at Sea World, and is one of California’s most tenacious stem cell research advocates. His stem cell journey began when his son, Roman Reed, was seriously injured in a football accident, leaving him mostly paralyzed from the neck down.

Both Don and Roman didn’t let this tragic event ruin their lives or steal their hope. In fact, both Don and his son were instrumental for getting proposition 71 to pass, leading to the birth of CIRM and new hope for patients with uncured diseases.

At yesterday’s book reading, Don chronicled the early battles to get human stem cell research off the ground in California, the progress that’s been made so far and the promise for future therapies. It was truly an inspiring event, bringing together patients, friends of Don and his wife Gloria, and CIRM scientists to celebrate the stem cell research accomplishments of the past ten years. (read more…)