HOW MANY CHRONIC DISEASES DO YOU HAVE? Support Proposition 14!

If I may ask a personal question — how many chronic diseases do you have?

I have four myself, but don’t worry, I am not contagious! I have:

1. Arthritis in hips, knees, left shoulder and back. I no longer bound up the stairs, and rising from the floor is not entirely graceful.

2. Peripheral neuropathy in feet, ankles and calves. This pins-and-needles condition wants to spread, but is manageable with medication.

3. Cancer. I had (have?) prostate cancer. I had surgery, radiation treatments, and hormone injections: is the cancer gone? I don’t know. I take blood tests every six months, and so far so good.

4. Stroke. I had one minor stroke. For a while it was difficult to speak.

This is not unusual. Did you know six in ten Americans have at least one chronic disease, while four in ten suffer two or more?.

These chronic (long-lasting or incurable) conditions are the reasons the California stem cell program exists — and why it should be renewed on November 3rd.

Chronic disease affects everyone, either ourselves, or someone we love, or a reason to pay taxes — and we need weapons to fight back. CIRM is the best of weapons.

Let me show you something wonderful. Look again at that list of diseases.

If you Google almost any of those conditions (along with the word “CIRM”), you will find California scientists fighting to defeat it.

Example: I just Googled one of my conditions: “peripheral neuropathy” and the word “CIRM”. and immediately found scientists working for its cure. 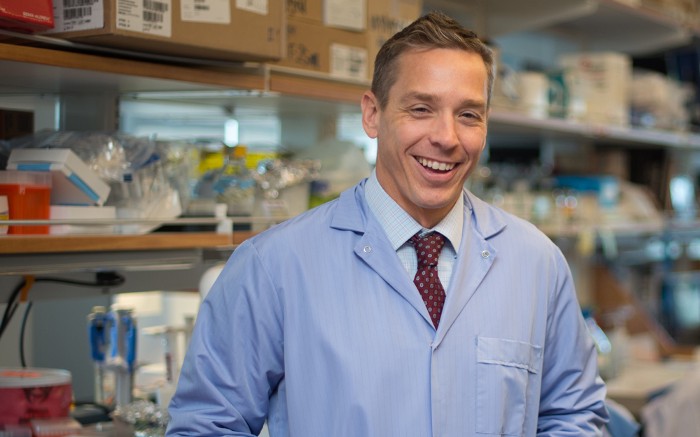 At the world-renowned Cedars-Sinai Medical Center, a scientist named Robert Baloh is working on the problem of peripheral neuropathy, which is caused by a defect in the genetic makeup, an unnecessary duplication of the PMP22 gene.

“The (scientist) proposes to …correct the defect in these cells…(then) he will transplant the genetically corrected (cells) into a rat model… to determine whether the cells…will alter the progression of the disease.”

My own conditions are easily born, an inconvenience at worst. Others suffer terribly; I don’t know how they get through the day.

CIRM is working to cure what was previously regarded as an incurable disease, and making progress systematically.

More than ninety therapies are already in clinical trials. You can see a breakdown of 64 of them if you go to: https://www.cirm.ca.gov/clinical-trials

CIRM directly funded portions of those trials; in the other cases, helping the research earlier in the process.

Fifty little children have been saved from the usually fatal “Bubble Baby Disease”, which you might know from the John Travolta movie, “Boy in the Plastic Bubble.”

Newly-paralyzed people have had upper body motion and control restored.

A profoundly blind woman had sufficient sight restored that she could see her children — for the first time.

Nothing is easy; nothing is quick. But it is working, step by step.

Unfortunately, our program’s funding is almost gone. It began in 2004 (though frivolous lawsuits delayed our start for almost three years) and it is 2020 now.

We must not let CIRM die. Bob Klein, the man who began the program, also designed its renewal, a proposal for which will be on the California ballot November 3rd., as Proposition 14: the California Stem Cell Research, Treatment and Cures Initiative of 2020

If approved by the voters, Prop 14 will mean $5.5 billion worth of research, with a minimal amount for maintenance and salaries for staff, so that 92.5% of the funding is guaranteed for research.

It will be financed by the sale of tax-free government bonds. Important: this is no sneaky new form of taxation. The money will come from the general fund, but there will be no payments at all for the first five years, and after that the payments will be spread out over approximately thirty years. It will cost every Californian roughly $5 per year: as Bob Klein says, “the price of a bottle of aspirin”.

Want to check my math? $5.5 billion divided by 40 million (population of California) is roughly $137 dollars. Divide $137 by 30 (number of years in payback time) and you get approximately $4.50 — four dollars and fifty cents a year. And that gives us a chance to cure cancer, and dozens of other diseases.

OR — we can go on paying the mountainous cost of chronic disease. The CDC estimates that 90% of all medical costs are from chronic conditions, adding up to roughly $3 trillion dollars…per year. Diabetes alone costs $249 billion annually.

Don C. Reed is the author of “REVOLUTIONARY THERAPIES”, from World Scientific Publishing, Inc., 2020, and other books on stem cell research.