Benefit 65 of California Stem Cell Agency: THE MAN WITH THE PLAN TO ASSASSINATE CANCER?

It is said that when a person dies, his or her brain offers one last gift: highlights of its owner’s past. Favorite moments return, and images of beloved people.

If that is true, I hope to see again my sister Patty, who died of leukemia. I miss her every day, and wish my grandchildren could have known her gentle kindness.

I hate the disease that took her. The only possible revenge would be to defeat that miserable liquid cancer, so other families may be spared the agony of loss.

The California Institute for Regenerative Medicine (CIRM) is working to end leukemia, and every form of deadly cancer.

Thanks to CIRM, I have had the privilege of meeting some of the giants in cancer research: people like Stanford’s Irv Weissman, the bearded colossus who discovered the cancer stem cell, evil twin of the good stem cell. His work explains remission: why cancer may seem to be gone — and then return — because the cancer stem cell can hide. Thanks to the Weissman research, the “cloak of invisibility” can be lifted away, exposing the cancer stem cell, giving the body a chance to attack it.

A smiling warrior is Catriona Jamieson, Deputy Director of UC San Diego Moores’ Cancer Center; called “Cat” by her friends, Dr. J. works tirelessly to defeat not only leukemia, but conditions leading to it, like polycythemia vera.

But when I read the research of Dan Kaufman, I was stunned. A photograph of three mice was hideous to look at, their bodies riddled with cancer. Beside it was another picture of three mice, their white coats shimmering, radiant with health — it took me a moment to realize that these were the same animals…

They had been healed of their cancer. They were not better; they were well.

Could this be the long-sought answer to cancer?

What a possibility! Think in terms of just money for a moment.

How much does blood cancer (such as leukemia) cost America?

The total number of people living with leukemia? According to the Leukemia Research Foundation, 387,000.

How does it work? If I understand correctly (always a question: which is why I ask scientists mentioned in my articles to check over the work) Dr. Kaufman began with Natural Killer( NK) cells, a white blood cell, part of the immune system.

These were made from stem cells: by the technique of making Induced Pluripotent Stem Cells (iPSCs), similar but not identical to embryonic stem cells.

A microscopic something called a Chimeric Antigen Receptor (CAR) is added to the NK cells, where it functions like glue. The resultant cell (now called a CAR-NK, or iPS-NK)) can adhere to a protein on the surface of the cancer — and kill it.

As Dr. Kaufman puts it:

Large numbers of CAR-NK cells can be made, and stored, ready to be used. One major advantage is that they need not be taken from each individual patient’s body; an exact match is not needed. This is a great time-saver, crucial when fighting cancer. When cancer spreads throughout your body — you want relief right now — not in four or five months!

Using CAR-NK cells may one day be as simple (and spectacular) as going to the doctor’s office, getting a shot, and the cancer goes away…

To develop the therapy, Kaufman is working with a company called FATE THERAPEUTICS, a name to remember.

How close are we, in terms of testing IPS-derived natural killer cells (NKs) on people? 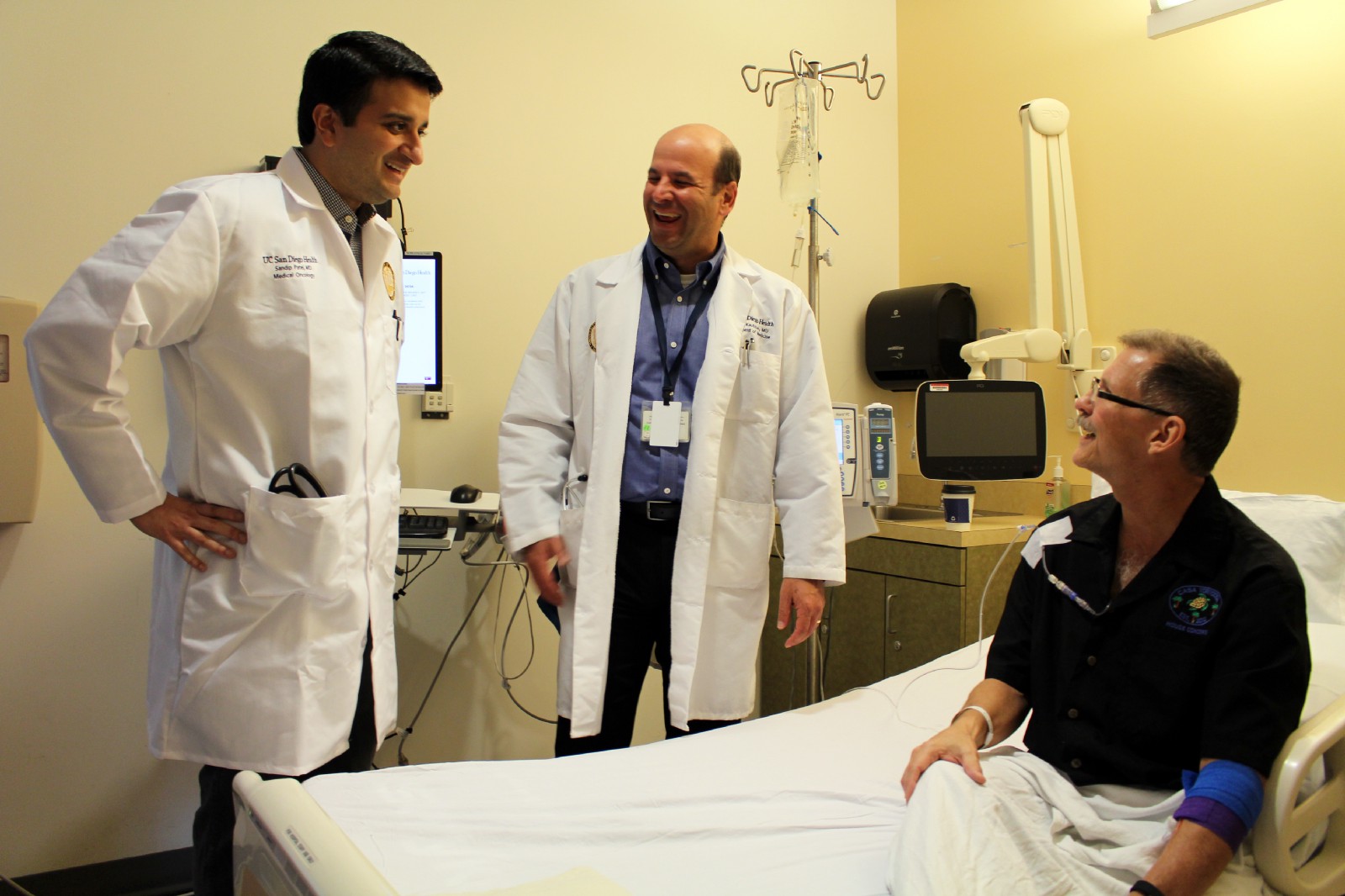 Right now, at the University of California at San Diego, a man named Derek Ruff has Stage Four colon cancer. How bad is that? There is no stage Five. Stage Four means the cancer has spread to distant organs in his body. The disease had been in remission for ten years, and then it came back.

Mr. Ruff has been given some of Kaufman and Fate Therapeutic’s off-the-shelf, iPS-derived ready to-go NK stem cell treatment. We do not yet know the results.

I am sure I speak for every family with a loved one threatened by cancer, that I wish Derek Ruff complete success in his trial: may the cancer by wiped away, and he regains complete and lasting health. Our hearts are with you, Mr. Ruff. You are fighting not just for yourself, but for all of us. Godspeed!

What lies ahead, as Kaufman works to develop a reliable and reproducible cure?

“More trials, lots of activity!” he told me in a recent conversation. As always (I have known him for years, since before he moved here from Minnesota) he sounded tough, cheerful, and determined — ready to face whatever challenges arise.

The world is waiting… for the man with the plan to assassinate cancer!

Don C. Reed is the author of numerous books, including: “CALIFORNIA CURES: How the California Stem Cell Program is Fighting Your Incurable Disease!”, published by World Scientific, publishers of the work of the late Stephen Hawking.