A BETTER RAT? Benefit #62 of the California Stem Cell Agency 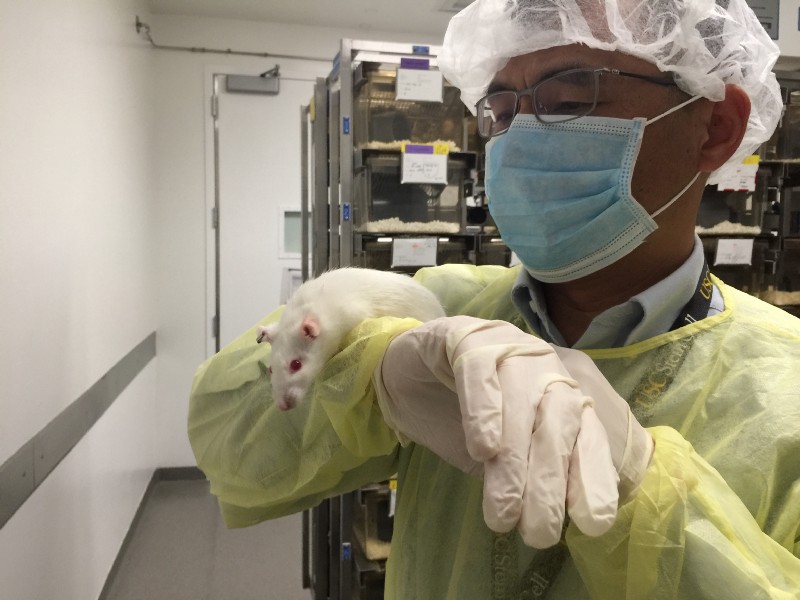 When I told my wife Gloria I was writing an article about rats, she had several comments, including: “Oo, ugh!” and also “That’s disgusting!”

Obviously, there are problems with rats, such as when they chew through electrical wires, which may cause a short circuit and burn down the house. Also, they are blamed for carrying diseased fleas in their ears and spreading the Black Plague, which in 1340 killed half of China and one-third of Europe — but this is not certain. The plague may in fact have been transmitted by human-carried parasites.

But there are positive aspects to rats as well. For instance: “…a rat paired with another that has a disability…will be very kind to the other rat. Usually, help is offered with food, cleaning, and general care.” — GUIDE TO THE RAT, by Ginger Cardinal.

Above all, anyone who has ever been sick owes a debt to rats, specifically the Norway rat with that spectacular name, rattus norvegicus domesticus, found in labs around the world.

I first realized its importance on March 1, 2002, when I held in my hand a rat which had been paralyzed, but then recovered the use of its limbs.

The rat’s name was Fighter, and she had been given a derivative of embryonic stem cells, which restored function to her limbs. (This was the famous stem cell therapy begun by Hans Keirstead with a Roman Reed grant, developed by Geron, and later by CIRM and Asterias, which later benefited humans.)

As I felt the tiny muscles struggling to be free, it was like touching tomorrow — while my paralyzed son, Roman Reed, sat in his wheelchair just a few feet away.

Was it different working with rats instead of mice? I had heard that the far smaller lab mice were more “bitey” than rats.

Wanting to know more about the possibilities of a “better rat”, I went to the CIRM website, (www.cirm.ca.gov) hunted up the “Tools and Technology III” section, and the following complicated sentence::

Hmm. With science writing, it always takes me a couple of readings to know what they were talking about. But I recognized some of the words, so that was a start.

I called up Dr. Qilong Ying, Principle Investigator (PI) of the study.

As he began to talk, I felt a “click” of recognition, as if, like pieces of a puzzle, facts were fitting together.

It reminded me of Jacques Cousteau, the great underwater explorer, when he tried to invent a way to breathe underwater. He had the compressed air tank, and a mouthpiece that would release air — but it came in a rush, not normal breathing.

So he visited his friend, race car mechanic Emil Gagnan, and told him, “I need something that will give me air, but only when I inhale,” — and Gagnan said: “Like that?” and pointed to a metal contraption on a nearby table.

It was something invented for cars. But by adding it to what Cousteau already had, the Cousteau-Gagnan SCUBA (Self Contained Underwater Breathing Apparatus) gear was born — and the ocean could now be explored.

A long-term collaboration with Dr. Austin Smith centered on an attempt to do with rats what had done with mice.

In 2007, the Nobel Prize in Medicine had been won by Dr. Martin Evans, Mario Capecchi, and Oliver Smithies. Working independently, they developed “knock-out” and “knock-in” mice, meaning to take out a gene, or put one in.

But could they do the same with rats?

“We and others worked very, very hard, and got nowhere,” said Dr. Evans.

Why was this important?

Many human diseases cannot be mimicked in the mouse — but might be in the rat. This is for several reasons: the rat is about ten times larger; its internal workings are closer to those of a human; and the rat is considered several million years closer (in evolutionary terms) to humans than the mouse.

In 2008 (“in China, that is the year of the rat,” noted Dr. Ying in our conversation) he received the first of three grants from CIRM.

How did he do?

In 2010, Science Magazine honored him with inclusion in their “Top 10 Breakthroughs for using embryonic stem cell-based gene targeting to produce the world’s first knockout rats, modified to lack one or more genes…”

And in 2016, he and Dr. Smith received the McEwen Award for Innovation, the highest honor bestowed by the International Society for Stem Cell Research (ISSCR).

Using knowledge learned from the new (and more relevant to humans) lab rat, it may be possible to develop methods for the expansion of stem cells directly inside the patient’s own bone marrow. Stem cells derived in this fashion would be far less likely to be rejected by the patient. To paraphrase Abraham Lincoln, they would be “of the patient, by the patient and for the patient — and shall not perish from the patient” — sorry!

Several of the rats generated in Ying’s lab (to mimic human diseases) were so successful that they have been donated to the Rat Research Resource center so that other scientists can use them for their study.

“Maybe in the future we will develop a cure for some diseases because of knowledge from using rat models,” said Ying. “I think it’s very possible. So we want more researchers from USC and beyond to come and use this technology.”

And it all began with the humble rat…